Announcing Our Next Sit Location, and the Sale of the House at 2314 NE Wygant St (SOLD)

It is official. We accepted a year-long sit in Santa Fe, New Mexico while vacationing in Florida this past week. We were setting our sights on something coastal, but this was just too good of an opportunity to pass up. Santa Fe is one of our favorite places, and the coast can wait. That is how it works with this go with the flow lifestyle.

Things are happening fast. As soon as we gave our landlords here in Portland our one month’s notice, they put the house on the market. So, we are packing away between showings. I am confident that this beautiful house will sell soon. It sure has been a pleasure to live in! Here is the listing, if you are curious.

I am spending this weekend at a client’s house. Paul is in and out between showings. We have met so many great people and pets here in Portland…it will be difficult to leave. It seems that the pets know that we are moving on. Animals are amazing, aren’t they? Maybe it is me projecting, but I don’t think so. Sigh.

There is so much more to share with you (like how I am going to be in Connecticut for most of October), but it is going to have to wait. I have been sans laptop for two weeks now (My MacBook Pro has been in the shop), and have a lot of catching up to do. Of course, I took a LOT of pictures while in Florida and want to get them all downloaded and labeled so I can share them with you.

If I sound a little overwhelmed it is because I am : ) In a good way! What is your fall shaping up to look like? We would love to hear from you. 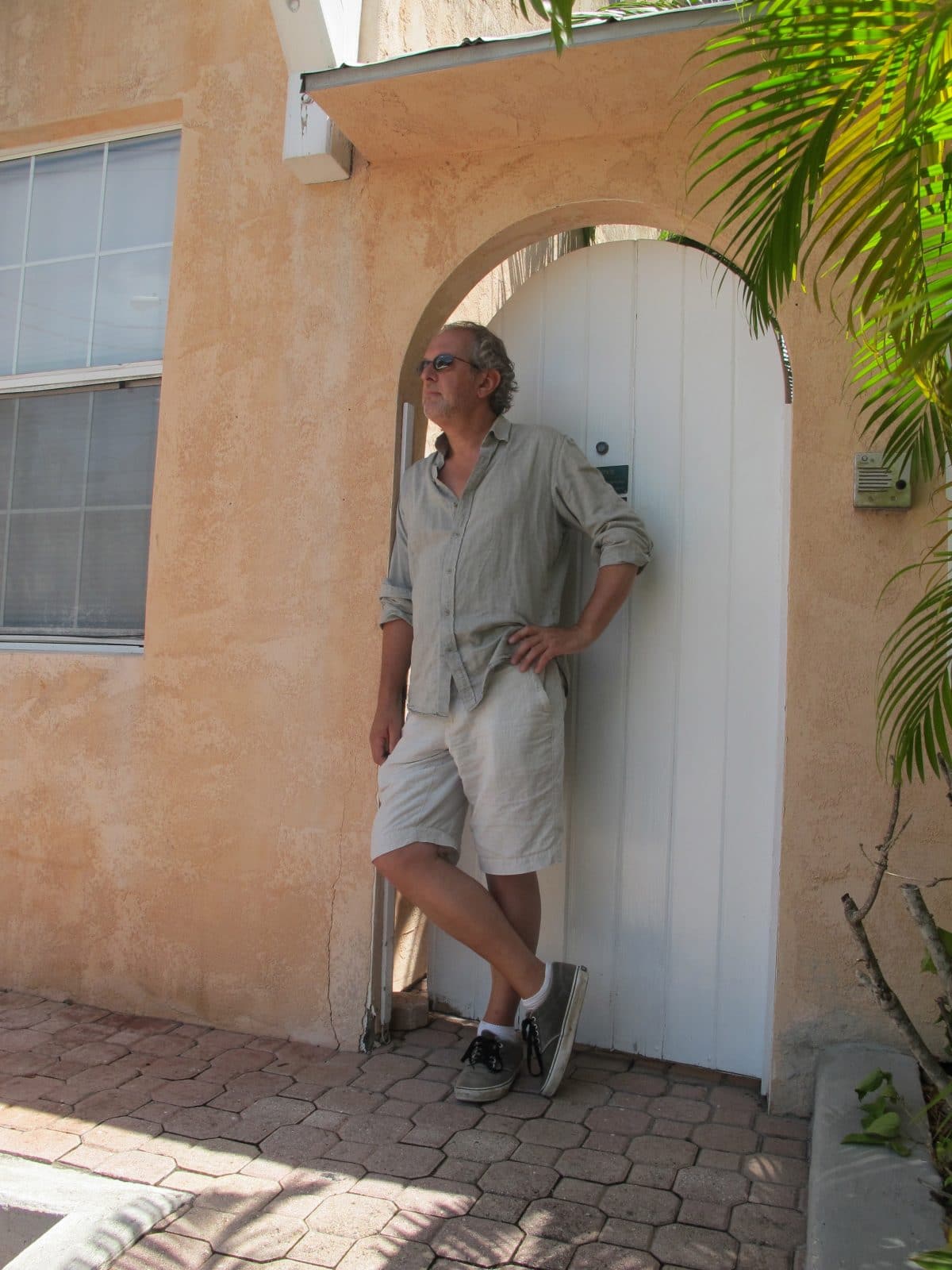 Paul and I had originally planned to spend five nights in Key West.  It took us a couple extra days to get out of Sanibel, owing to Hurricane Isaac, so we ended up having three nights instead.  We were a little disappointed at first, but Sanibel was a great place to be stuck in (see our Sanibel post for storm pics).  I think we did a pretty good job of making up for lost time…

The Road to Key West

Paul and I both love driving the Seven Mile Bridge to Key West.  This is the longest bridge I have been over and at times, it seems like it is just us and the water.  Here you can see the old bridge, as well.

Our first dinner in Key West was at a fun little place called Better Than Sex.  Yes, we had dessert for dinner, rebels that we are.  What you see here is “Brie cheese and dark chocolate grilled together on sweet homestyle butter bread, served with strawberry prosecco soup for dipping (or drinking).”  SO GOOD.  Paul used a flashlight in order for me to capture this picture as the place is very dark inside.  We marveled at how the waitress could keep a straight face while suggesting such menu items as “rim jobs”.  Tee hee!

Truman is a Regular at Schooner Wharf Bar

Truman is one of the first friends I made while in Key West.  Boxers are one of my favorite breeds.  He seemed to know everyone at the bar!  Key West is very pet friendly, from what we have observed.  Our original plan was to network like crazy and find us a winter sit there, but we were officially offered a year-long sit in Santa Fe, New Mexico while in Sanibel, so we were able to make this trip a bonified vacation.  We *are* accepting inquiries for winter 2013, however!

Truman Bellies Up to the Bar

The first time I went to Key West was with my friend Nancy.  I’m thinking it was at least ten years ago.  We visited the Hemingway Home and I gained a newfound respect for the writer.  He was a chauvinist and I did not enjoy reading The Old Man and the Sea one bit in high school, but the man could write.  He loved his cats (bonus points) and added much to the allure of Key West.  My favorite book of his is The Son Also Rises.  Paul hadn’t been so we spent the better part of the morning exploring Hemingway’s home and grounds.

One of the 40-50 Famous Polydactyl (six-toed) Hemingway Cats

Hemingway Cat, Showing Off His Paws

Keeping Cool at the Hemingway House

I love old beat-up trucks.  Every time I see one, I wonder what it would take to get it running, and what color paint I would use to pretty it up with if it were mine.  I am going to need a truck to tow my Airstream one of these days, after all.  Hopefully “my” Airstream will become “ours” when Paul falls in love with it as well.  As of this writing, the fascination lies with me more than him.

Banged Up Old Truck in Front of Mac's Sea Garden

Paul and I visited the Chart Room back in 2008.  I have no idea how we found it, as it is nestled in a luxury resort.  Paul has a way of finding the best watering holes, so I just go with his suggestions most of the time. We are both “atmosphere” junkies and this tiny spot has plenty of it.

Locals at the Chart Room

We had also already been to Louie’s.  I love trying new places, but since we hardly ever get to Key West, there were a couple of places that needed revisiting.  Just to make sure they were as good as we remembered them to be.  And they were.

Schooner Wharf Bar was new to us and we went back a couple of times as we enjoyed the music, the drinks and the laid back crowd.  It is mostly outdoor, but with plenty of shade for freckly people like me.

Harpoon Harry's for an Early Breakfast

I love diners, and we were advised to check out Harpoon Harry’s for breakfast.  It did not disappoint.  We actually really enjoyed the food and drink wherever we went, whether the menu was gourmet or down home.

This Bird Rules the Roost in Key West

Key West is a great place for wandering.  It is a small island…no need to rent a car or take a taxi if you are OK with walking or riding a bike around in the heat (September/October in FL is pretty hot).  I just made sure that I had my hat and sunglasses on me at all times.  You will see chickens and roosters all over the island, along with fun little shops like the ones below, if that is your thing.  Paul and I are more foodies than we are shoppers, so I have no recommendations there.  If you have a favorite or two, please share in the comments section.

Same goes for cruise ships.  Neither of us has been on one and I don’t see Paul ever deciding to try it.  He is convinced it is going to be a bunch of people who dress funny, gorging themselves on buffets and shopping or playing shuffleboard the rest of the time.  I will have to remind him of the plaid shorts he bought this summer.

I actually applied for a small liner earlier this year; an educational cruiser that held less than 200 passengers and had guest lecturers of the intellectual variety.  The appeal for me was that I would get paid to travel and meet interesting people from all over the world, and that the liner was small enough to get into ports that the cruise ships couldn’t fit into.  Alas, I was not offered the job.

This is More Our Style

We both love being on the water, but our experience is limited to mainly fishing and touristy boats.  Perhaps we will find ourselves a yacht sit here in the near future…

Musician at the Schooner Wharf

We went back to the Schooner Wharf Bar for our last Key West breakfast and I could not get over how good it was.  How many bars serve excellent breakfasts?  I splurged and had eggs benedict (I give the ham to Paul) and it was divine.  That is saying a lot as I have had more than my share of bennies.  The cardboard plate and plastic utensils didn’t even phase me.  I wanted to talk to this guy but there wasn’t time.  He had his guitar with him and reminded me of Keith Richard.  Bet he has a few good stories to tell.

We did have a chance to meet a couple of interesting characters at Don’s Place and would like to thank Key West Lou for suggesting it.  Sadly, I have no pics of Key West Lou (he was about to go on air so we were lucky to just chat for a few) or Don’s Place (too busy enjoying the locals).  Next time, we will give you more notice and buy you a proper drink at one of your favorite watering holes, Lou!

And yet another delightful adventure under our belts.  I love this picture of Paul.  We stayed (for the second time) at the Pilot House.  I don’t have any pictures because we spent most of our time there at the pool, which is clothing optional.  Paul has no problem getting naked (I think it is a European thing).  I am OK with it now, but only with strangers.  Don’t want friends seeing my bits, and I don’t want to see theirs!  Anyway, the Pilot House is a great place to stay.  We had a lovely dinner at Michael’s one night with friends we met in the water.  After a couple of days poolside, it was kind of weird seeing them with their clothes on.

Sadly, my Canon has been laid to rest since returning from this, our latest adventure.  I am not enamored with my i-Phone camera, even though everyone else seems to be.  So, I need to figure something out soon as a lack of pictures means a lack of blog post motivation on my end.  If you enjoyed this post, please leave a comment and share with friends.  If I wanted this blog to be all about us I would simply journal or scrapbook, after all…