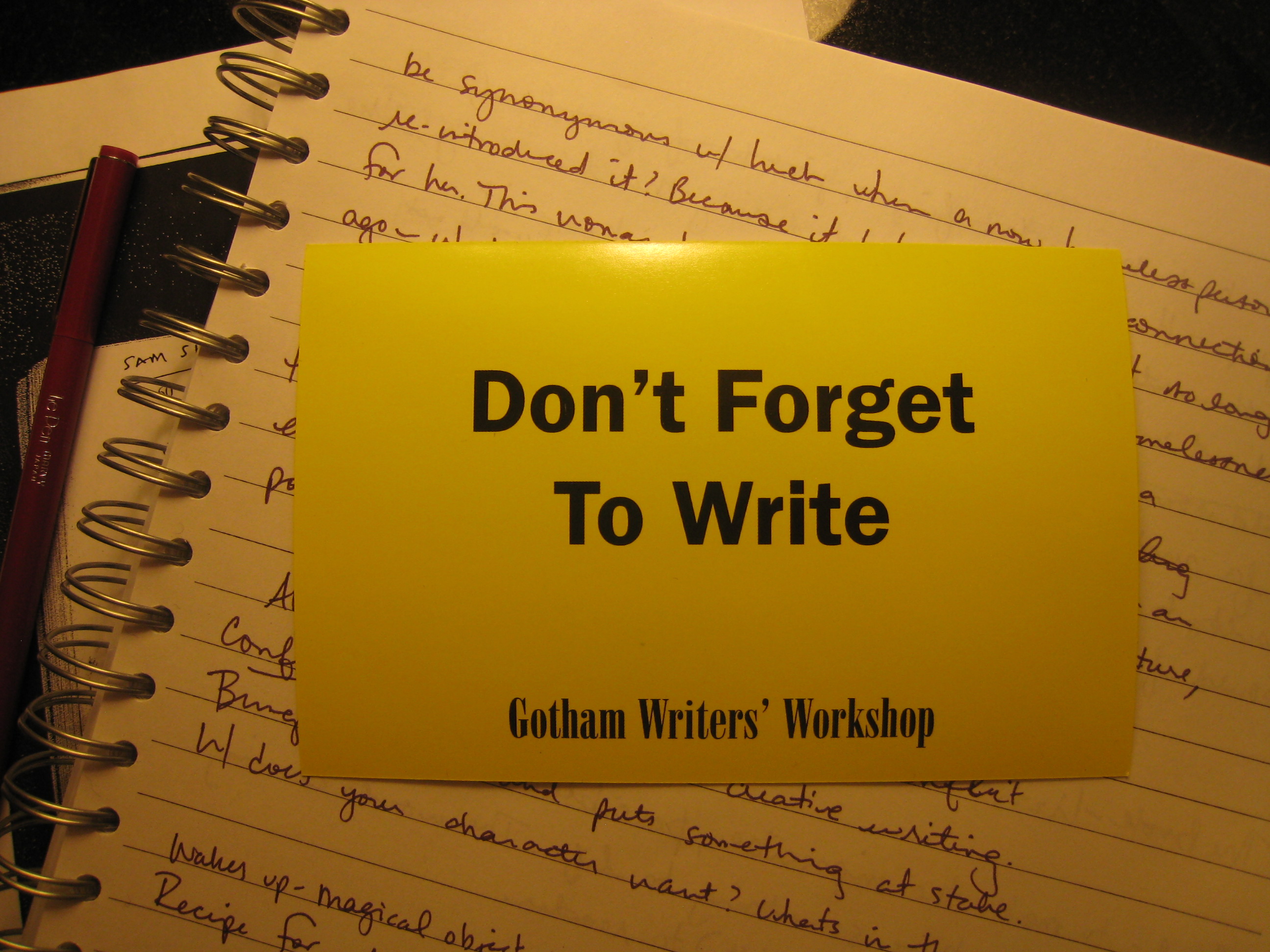 How fun is it that I found myself  in NYC the very same week that GWW (Gotham Writers’ Workshop) held their annual Winter Open House?  Much fun, for me and for Paul, who (being the gentleman that he is) escorted me to the classroom on Bowery (Lower East Side) then had himself a pint or two at McSorley’s Old Ale House while I learned how much there is to learn about writing.

The first class (Nonfiction Writing) was taught by Pauline Millard, who had me at “I write for the The Huffington Post”.  I love that she stressed that in order to be a good writer, one really must read.  I can do that.  I know there is more to being a writer than reading a lot, but it’s a good start, isn’t it?

Ms. Millard gave us several writing prompts (my favorite being “Write about someone you can’t stand”).  A few brave souls shared their five minute manifestos with the rest of us (apparently we all have someone or something we can’t stand – relief all around).  She suggested we read On Writing by Stephen King.  Being the good (i.e. obsessive) student that I am, I decided I must read that book.  Now.

Evan Rehill taught the second class (Creative Writing).  I enjoyed his teaching style (fired up) and the fact that he felt mortally wounded by a paper cut inflicted upon him last class. I wanted to know (and still do) what the tattoo on his inner wrist symbolized (it looked like a star that had lines missing).  Don’t ask me why I didn’t ask him – I don’t know why – just didn’t.  Maybe I will e-mail him.

Mr. Rehill taught that the words coming to life are what we give to the reader and gave us the following writing prompt:  “Pick an ordinary object and infuse it with magic”.  OK, got it.  Next prompt?  “Add conflict”.  What does my character want?  What is in the way?  Juicy.  Let’s make the impossible possible, shall we?

Now, of course, I want to take classes every Saturday in NYC.  The classes aren’t too expensive, but the travel (train, parking, subway, etc) would run a couple hundred a week, easy.  Alas.  GWW does offer classes online, which I typically shy away from…will have to think about it.  Meantime, thank you Gotham Writers’ Workshop for enriching my NYC experience!

I found these darling shoes at Housing Works Thrift Shop on Columbus for $8.  This, from their website:

The Housing Works Thrift Shops occupy seven upscale locations in New York City, selling high-end vintage treasures to bargain hunters and fashionistas alike. The Thrifts not only provide more than $12 million in funding per year, but also ensure a supply of clothing and essentials for our clients.

I love these shoes!  And I found a Paul Theroux read for Paul for $4.50.  Now, off we go to MEZZOGIORNO in Soho for some Italian eats…more later…

You can find this mosaic in Central West between 71st and 74th Streets.  The area is known as Strawberry Fields and is endorsed by 121 Countries as a Garden of Peace.  Yesterday was very crowded, so I came back this morning and sat for a while on one of the many benches surrounding Imagine, which was donated by the City of Naples.

During that time I saw many people come and go, most of them sitting on the mosaic and having pictures taken with friends.  A man was practicing T’ai Chi Chuan on a nearby grassy area while locals walked their dogs and chatted about relationships, mostly.  I loved seeing so many young people at the mosaic and teared up listening to their reasons for coming to this place.

Just as I considered leaving Strawberry Fields,  a newlywed couple appeared in the near distance.  I remained glued to the bench while watching them walk past the mosaic.  Several people had wished them well when I finally found my voice and stood, asking them if I could take a picture.  All I could say was “beautiful” and then came more tears as I sat back down and they continued on…

If you could live in any big city in the world, where would it be?  For me, it would be New York or San Francisco.  Or possibly Dublin or Florence or London…hard to say since I have only been to those places once.  Today, I have pretty much convinced myself it would have to be New York.  What an amazing twenty-four hours it has been!

We left the 4Runner in Providence, Rhode Island yesterday and took the train in to Penn Station.  I began reading one of Em’s Christmas gifts en route;  The Big House by George Howe Colt.  It is a true story about “a century in the life of an American summer home” and takes place in and around Cape Cod…loving it so far.

We are staying in an apartment minutes away from Central Park (Strawberry Fields section), the Museum of Natural History, and Magnolia Bakery : )  I am pretty much in Heaven.

Got here in time for a walk around the neighborhood and a subway ride to Greenwich Village, where we had what could quite possibly be the perfect meal at The Place, which reminded me of my adolescent cave fantasies (definitely a blog for another day).  Think just the right lighting (dim) in a cozy underground space sans windows.  And curved archways.  And Sweet Potato Ravioli, Malbec, then Moussaka for the main course.  So impressive that Paul cannot stop reminiscing over the ravioli.

We then walked it off, stopping in shops like Bleecker St. Records  which just happened to be playing Social Distortion and happened to have a John Lennon CD (Acetates & Alternate Mixes) to add to our collection.  Life is sweet.

But wait, it gets sweeter.  Back in the Upper West Side, we hit Magnolia Bakery for one blueberry crisp and one banana pudding (Valynne), and one apple crisp and one lemon bar (Paul).  And coffee in honor of the City that never sleeps.  Oh, and midnight snacks including garlic knots from Columbus Gourmet Food.

OK, that was just last night.  I guess if I go over every little detail of our trip I will lose you.  How about some pics from today, then?

There were too many people around Strawberry Fields this morning to get a decent pic of “Imagine”, so I will try again tomorrow.  We are staying around the corner from the Dakota Building; pretty amazing digs.  I fell in love with this gazebo – does anyone know anything about it?  Do people get married here?

It was bloody cold today, hence the layers, funky hair and frozen expression.  I pretty much had to have a “You’re Fired” Bloody Mary in the Trump Bar, which I have to say was the best Bloody I have had since returning to the East Coast.  Good thing, $18 later.  As we were leaving the building we were bombarded by protestors.  I didn’t quite catch what they were protesting but I instinctively felt they had good reason then felt a bit ashamed for having gone there…wonder what Trump did this time.

I love how most of the skaters at Rockefeller Center are wobbly like me…how many people skate there just to say they have, do you think?  The flags really struck me – don’t remember them being there before.  Have I mentioned how much I love New York City?  Just making sure.

Paul doesn’t like posing for pics.  It has taken me a long time to (somewhat) accept this fact.  Hence the side profile, taken in Times Square.  I really like the curls that ensue when he has gone longer than he would like between cuts…and that is why I posted this.  Below is the one billboard that I felt was photo worthy. 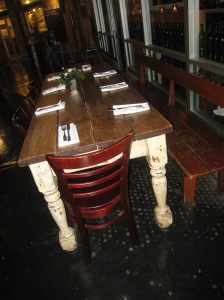 If and when we decide to settle down in one place, I believe this will be the table I choose to settle down with (hope you like it too, Paul!?!).  The remainder of today’s New York pics were taken at Chelsea Market.  Neither of us had been there – we were not disappointed.

I don’t need any more glass items.  But I love glass, and I can’t resist photographing it.  Bowery Kitchen is a restaurant supply that has been in business since 1975.  I don’t cook much but can spend hours in shops like this – and it is a great place to buy tools of the trade for Paul, who is an amazing cook. 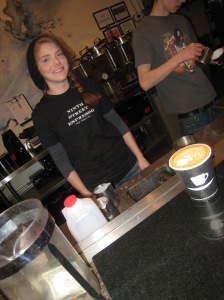 This young woman made the best looking (and tasting) latte I have ever experienced.  She was sweet in letting me take her picture with said latte – thank you, beautiful barista! 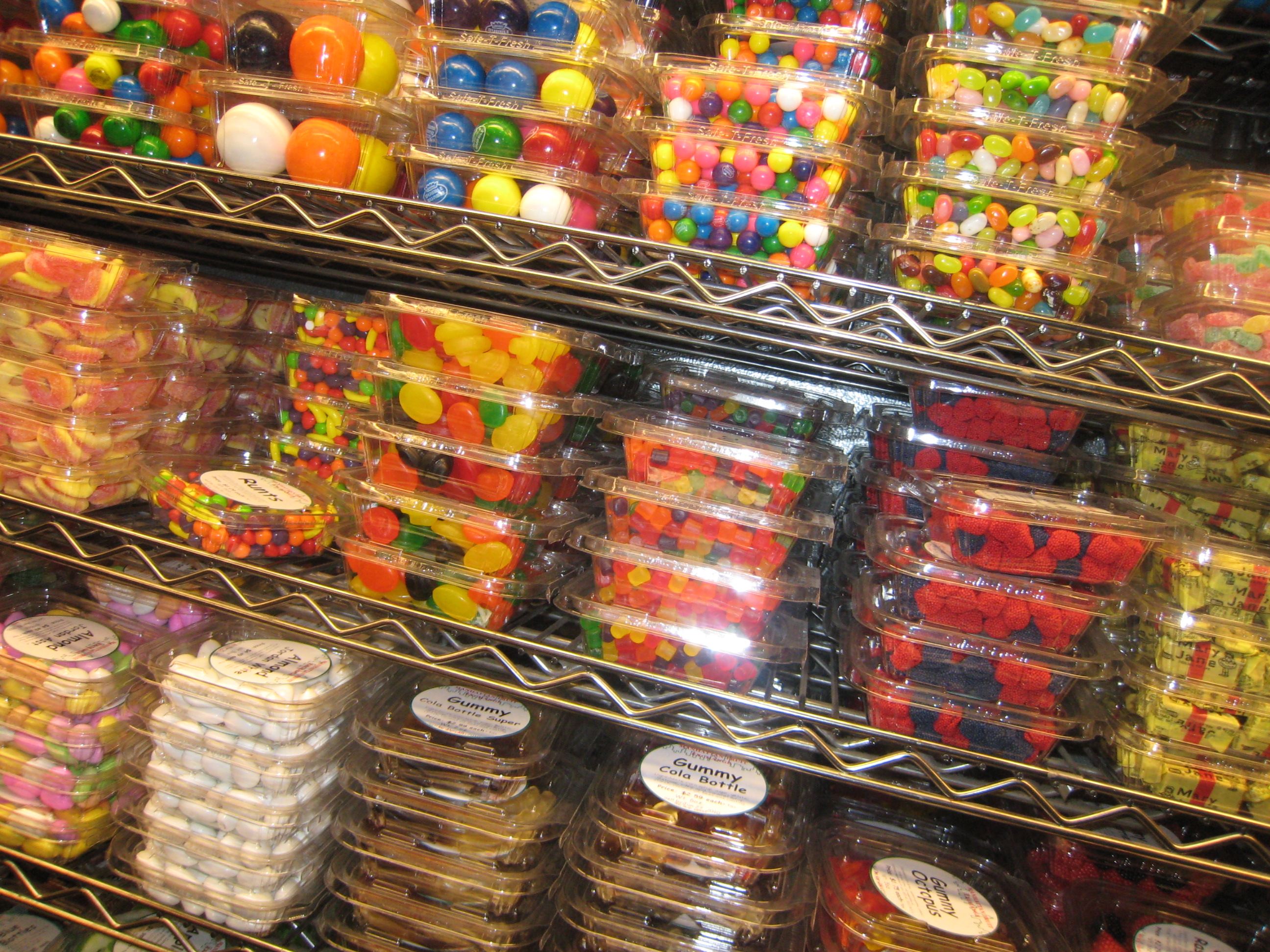 I backed away from the candy aisle at Manhattan Fruit Exchange – but only long enough to take this photo : )  How deliciously colorful – just look at those jumbo jawbreakers!  Gummy Cola Bottles, anyone?

Not being a real foodie (or much of a druggie unless you count chocolate, wine, and the occasional caffeine rush); I know little about this fungi, aside from the fact that, much like the candies above, just the sight of them brought me joy, deeming them worthy of a mention. 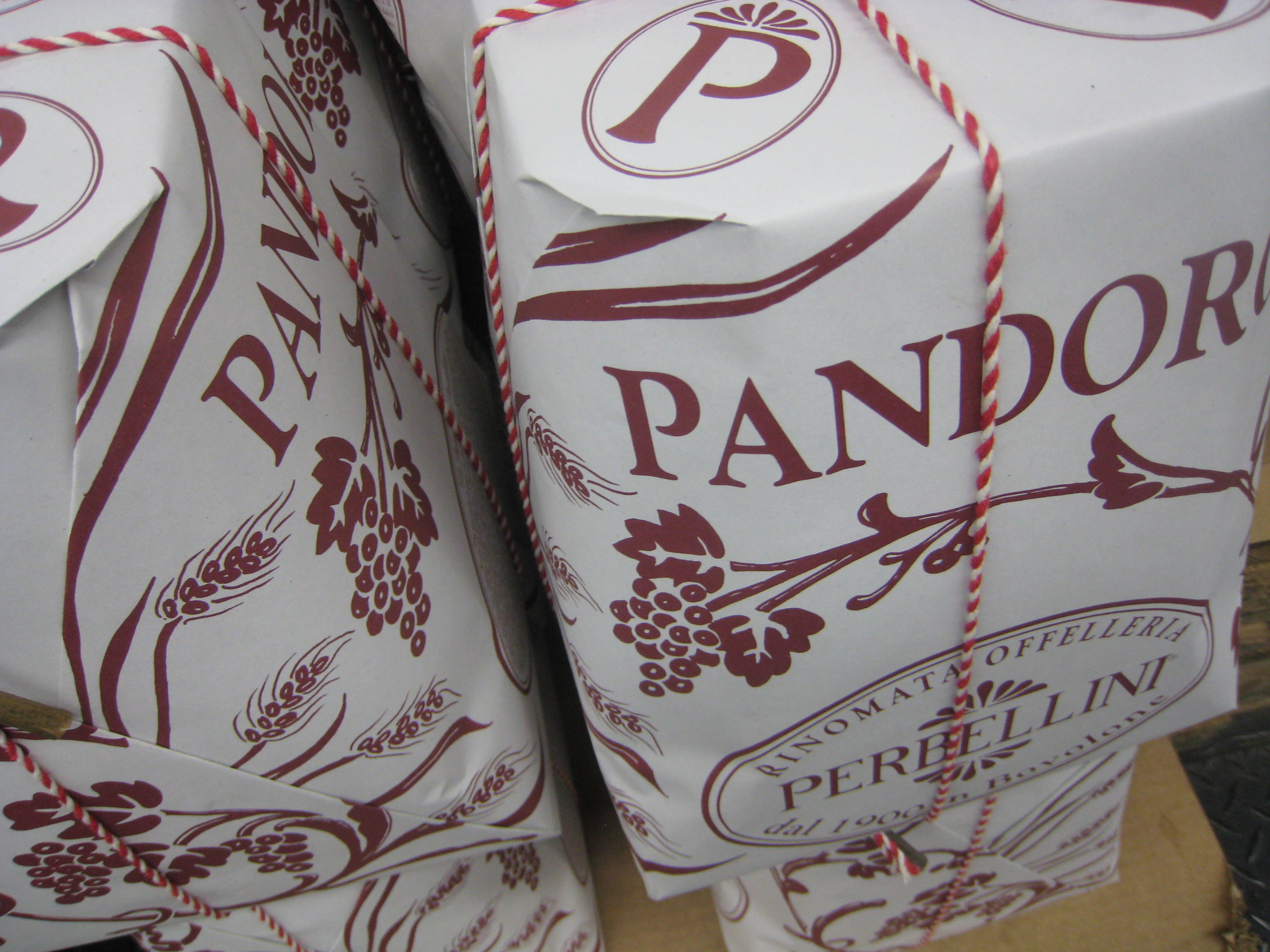 The red and white paper packaging so pleased me that I hardly cared what was inside.  buon Italia (lower case b intentional) had all of this really amazing food.  One thing I find so very cool about New York City is the discovery factor.  This place had butter made from Parmigiano Reggiano.  We decided to come back for that as the line was a bit long.  Then we forgot.  I will most likely nip back out tomorrow for it while Paul is working.

Last stop at the Market – Amy’s bread.  We haven’t tried it yet, but judging by the smell and the overall vibe of the place, we will not be disappointed.  There was even a room behind glass full of bakers and equipment and bread (duh)…we love Chelsea Market!!!

One quick trip back to the Village for a pint at The White Horse Tavern –  the very same tavern that Dylan Thomas frequented a little too frequently; the same tavern frequented by the likes of Bob Dylan, Jim Morrison, Jack Kerouac (who was bounced from the establishment more than once), and Hunter S. Thompson.

Then to the newstand for a Sunday Times (New York and London) and back on the subway “home”.  There you have it…bliss, defined. 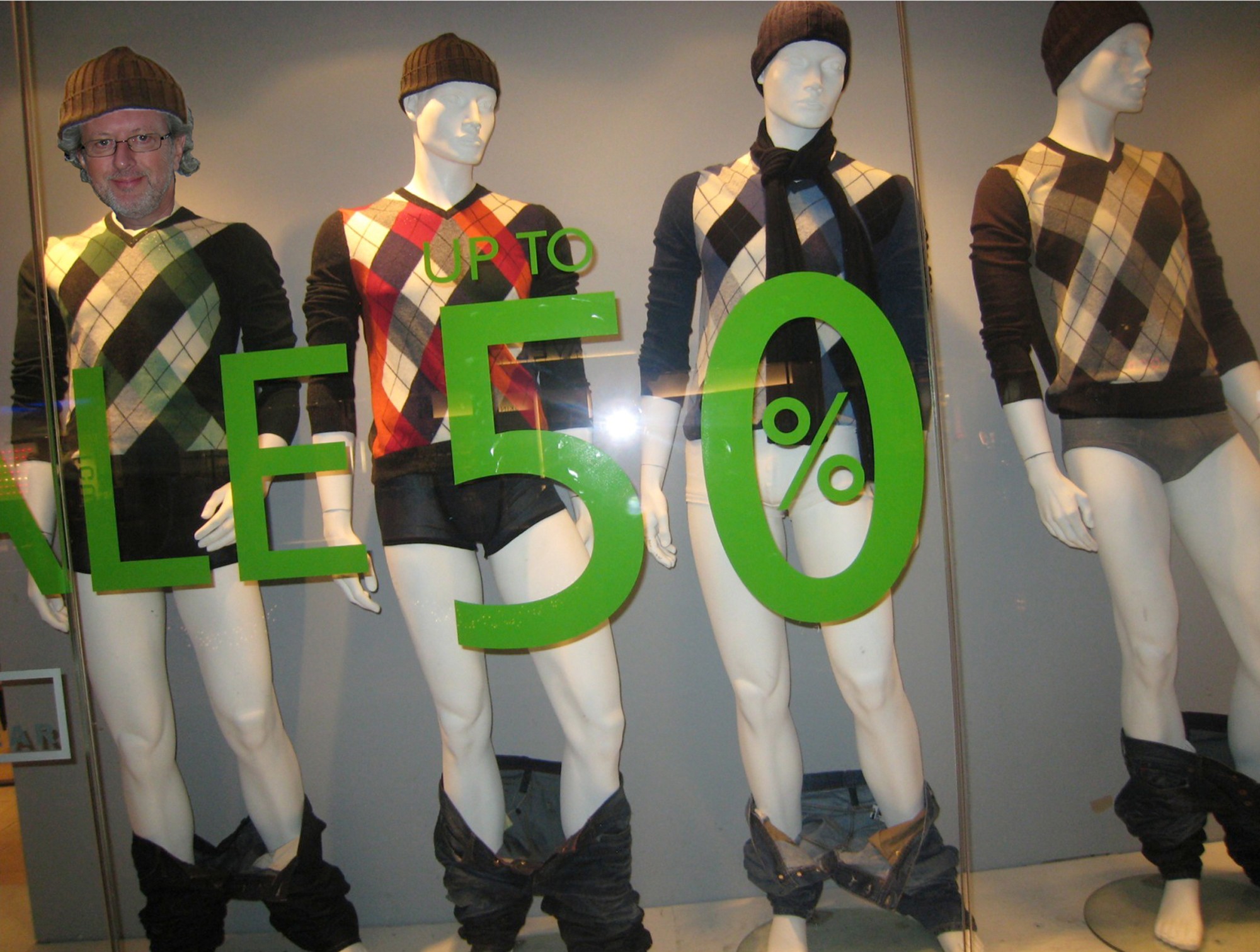 Thank you, Michele for this new and improved display pic...

First – I would like to thank Michele for her Photoshop (or however you managed that) expertise, not to mention her creativity and the fact that she’s got Paul’s back.  I am sure he will thank you profusely once he discovers this gem : ) Find out more about Michele and her mad skills at www.myvispro.com . Doesn’t Paul look good in argyle?

Second – I would like to announce the latest CC prize winner!  Paul drew one name from the pile and guess who it was?  DENISE S!  Yay, Denise!  You, who actually reads my blogs and comments often,  have obviously been blessed by the blog gods…luvly jubly as Paul likes to say : )

Third – Paul and I are off to New York City tomorrow for a few days.  I am not your typical city girl but I do love  NY.  Paul has a business meeting there and the homeowners are here with Milo so I am off to wander (especially looking forward to reacquainting myself with the Village and SoHo).  There will be blogging involved…stay tuned!