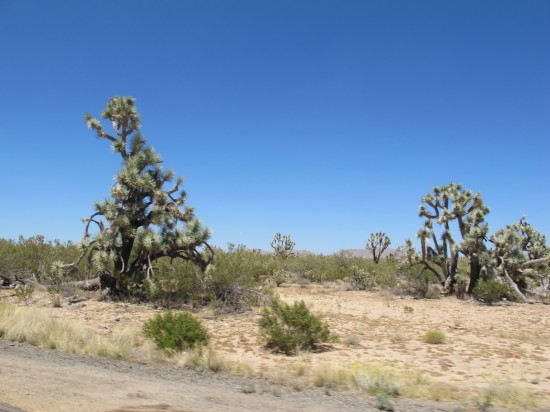 Paul and I left the 4Runner in New Orleans and flew to Arizona.  We rented a car and drove through Arizona (see above) to get to Las Vegas. Seems strange, but it saved time and was less expensive than driving ourselves, seeing as we had to be back in Lake Charles, Louisiana for a sit in two weeks time. 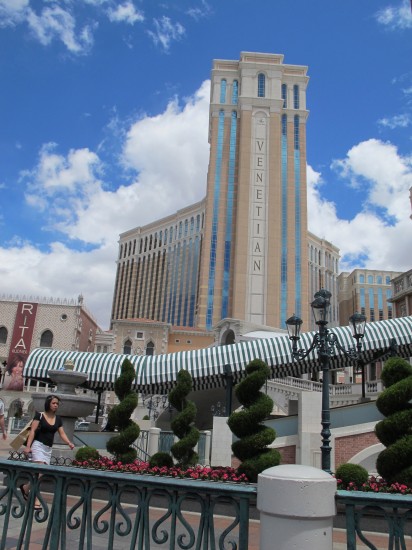 Paul had never been to Vegas, and that was the big draw.  It is one of those places that most of us want to experience, if only that one time.  This was my second time there, and I definitely appreciated it more as a thirty-something than a twenty-something (i.e. I actually remember most of it). It was my bestie’s bachelorette, after all.  Like you never woke up on a roof before? 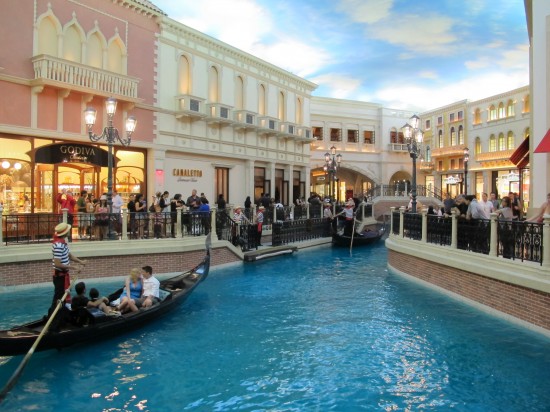 You don’t need to be a gambler these days to enjoy the casinos.  They are completely over the top.  Staying at the Venetian was a treat. This gondola scene was a bit surreal, especially after having been to Venice, Italy in 2007.  Weird, but fun…like Epcot for grown-ups with money to burn. 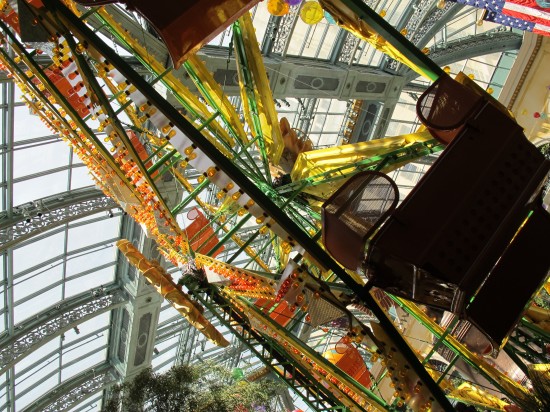 Ferris Wheel in the Bellagio

The casinos were all decked out in honor of Memorial Day.  This ferris wheel at the Bellagio was my favorite. 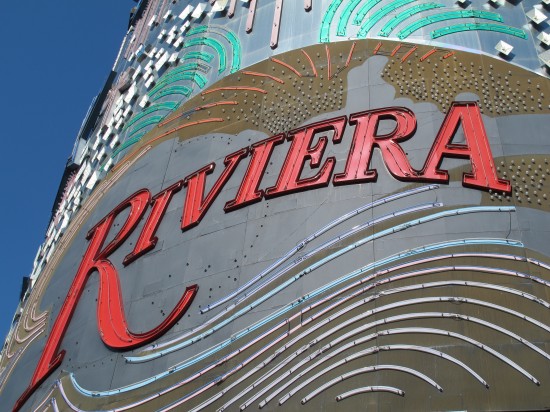 The old school facades still appeal to me most ~ they just scream Vegas, don’t they?  Makes me wanna see Swingers again.  Was that really filmed back in 1996?  Sigh. 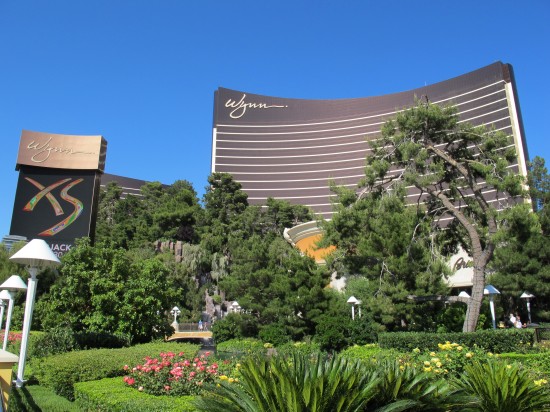 I just wandered around with Paul our first day there…he had this glazed look in his eye.  It is always fun finding places that fascinate Paul. 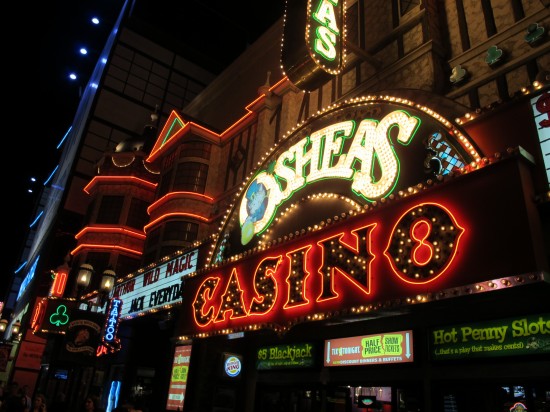 I played cards at the Flamingo, or was it the Riviera?  Paul isn’t a gambler (although he did hit up the penny slots at O’Sheas) and I only had a few bucks to play with and the Venetian really wasn’t my scene.  It was a beautiful place to stay, though…the room was the size of my old apartment, and I do love a good soak.  So luxurious! 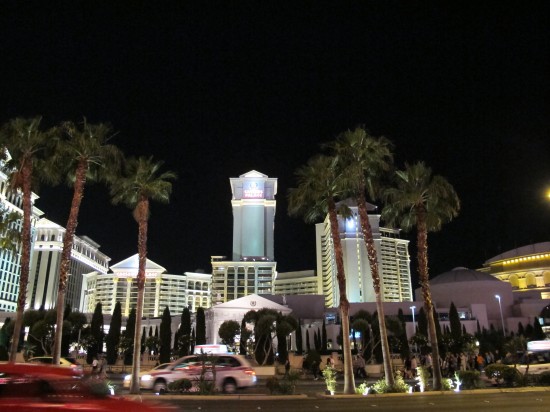 We went to Caesars palace and ended up in the shops and it was a serious challenge, finding our way back out.  That would normally freak me out but one makes exceptions when in Vegas. 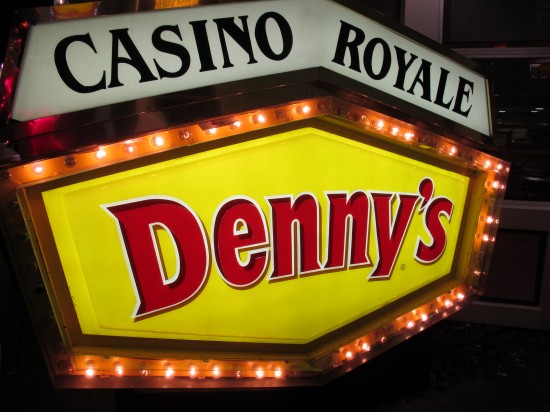 Yes, we ate at Denny’s.  Don’t judge.  Can’t eat every meal at the Venetian.  Well, you can.  If you win big.  No such luck with us, but that is OK – we had a blast at Denny’s!  I reminisced over my Denny’s days (like the year I ate all three free Birthday meals there and got sick) and explained to the Brit what a “Moons Over My Hammy” is. 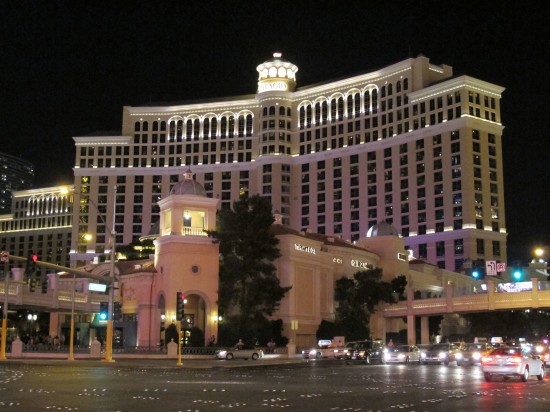 We were wandering again when this Paris Hilton look-alike practically ran into Paul with her sign.  It would have made his night had he had any recollection of the encounter (again, no judging…it was his first time in Vegas, after all). 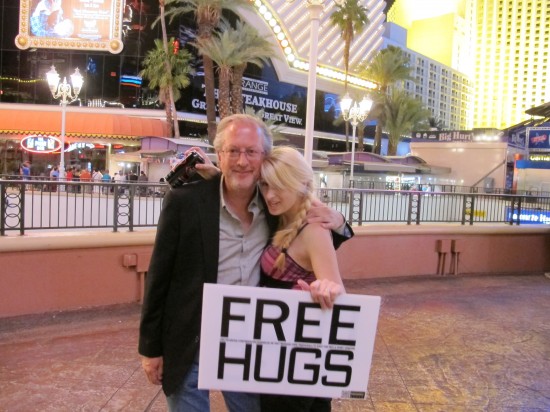 The highlight of our stay was the Phantom of the Opera, which I have been wanting to see for decades.  I dressed up in a black and white polka-dotted dress and everything.  It was fun to alternate between high society and…Denny’s. 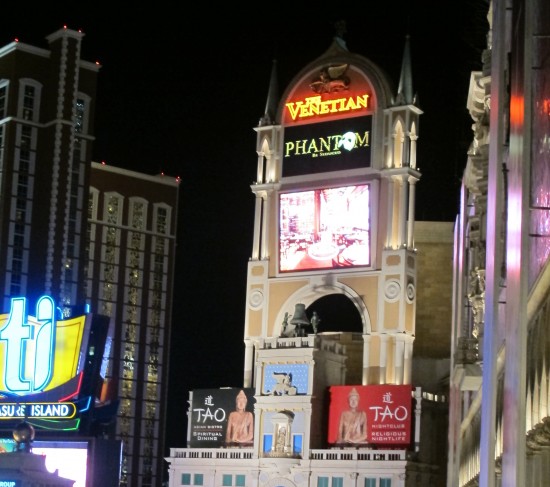 The Phantom of the Opera

Meanwhile, the twenty-somethings were standing in a miles-long line to get into TAO.  I know this makes me sound old, but holy crap, the dresses worn left nothing, not.a.thing. to the imagination.  Note to young women wearing short dresses – the look is ruined when you are constantly pulling down/up said dress and stomping around/teetering in your brand-new stilettos.  Practice at home first!  OK, I am done. 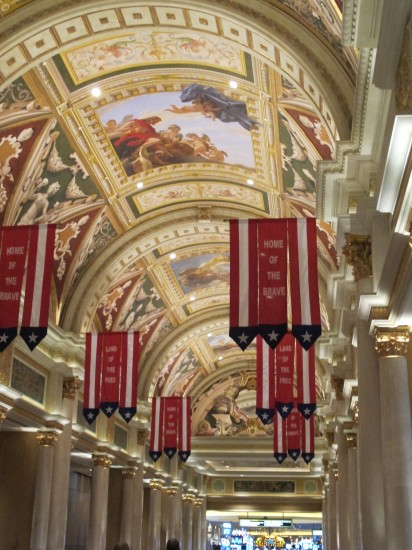 Home of the Brave, Indeed

Have you been to Vegas?  What did you love about it, or what freaked you out about it?  I would love to go back and play a real poker game…it’s on my bucket list. 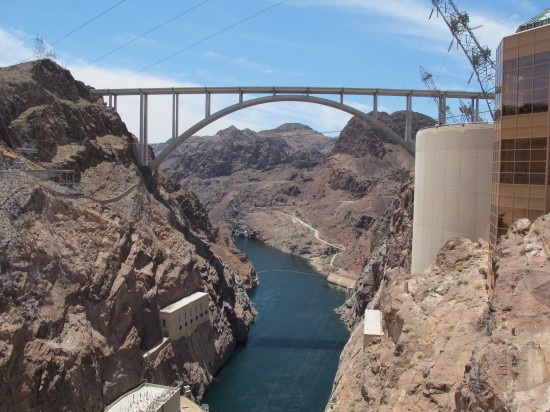 I am a little bummed that we didn’t manage to fit Grand Canyon into our schedule as I have NEVER been.  I know!  I will get there, eventually.  Stopping at the Hoover Dam on the way to Sedona was a consolation. 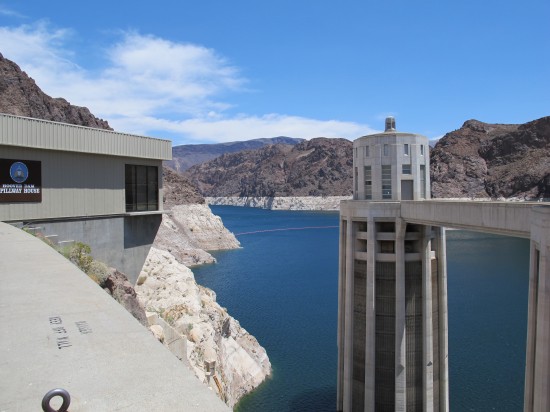 “High Scaler” was sculpted by Steven Liguori in 2000.  Can you imagine having a job like this?  I have a hard enough time climbing up a twenty foot ladder. 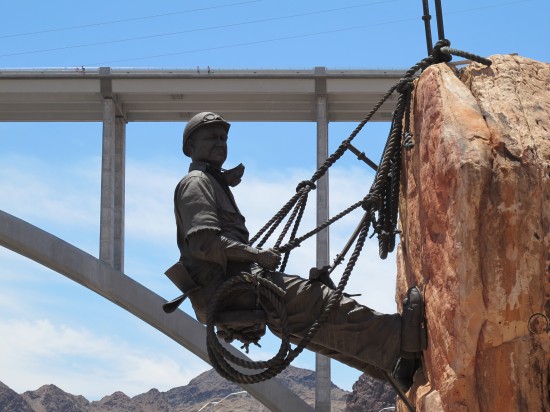 High Scaler, in honor of those that built Hoover Dam

Feels so good to be out and about again.  Six months in Tennessee didn’t exactly fly by.  Open road, how I’ve missed you…

Dining Room at the 1896 O'Malley House

Dancing in the Street 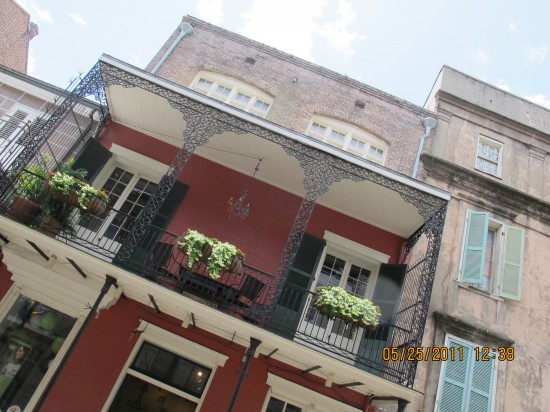 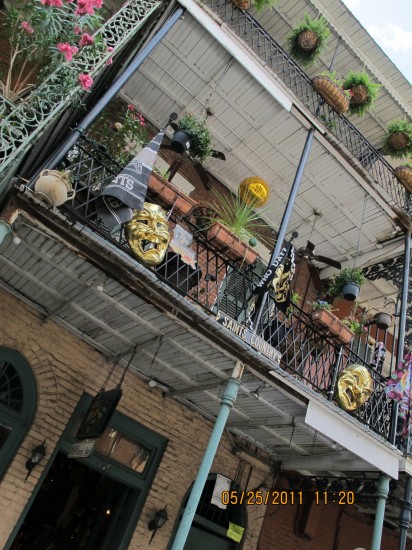 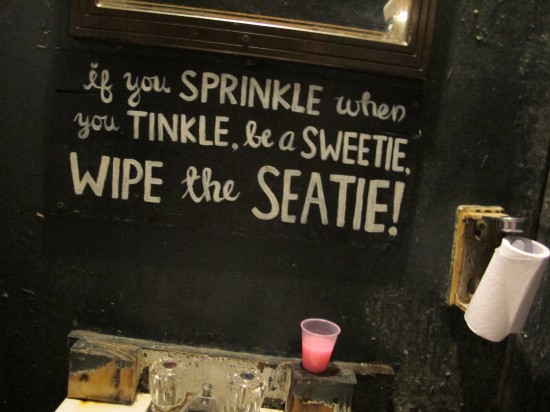 A Friendly Reminder from the Erin Rose 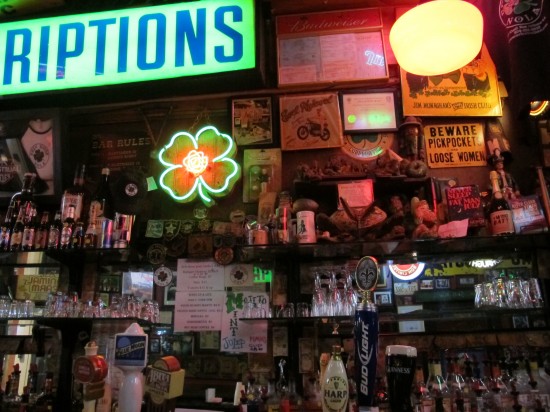 Sitting at the Bar 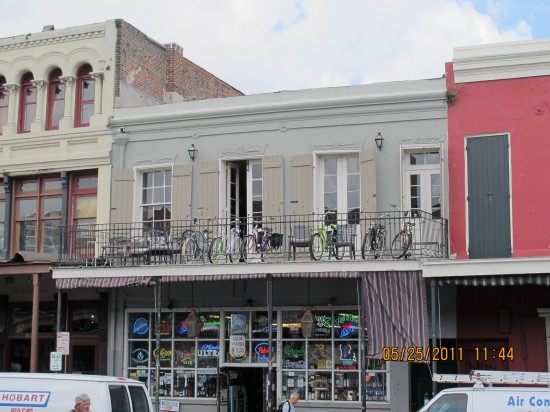 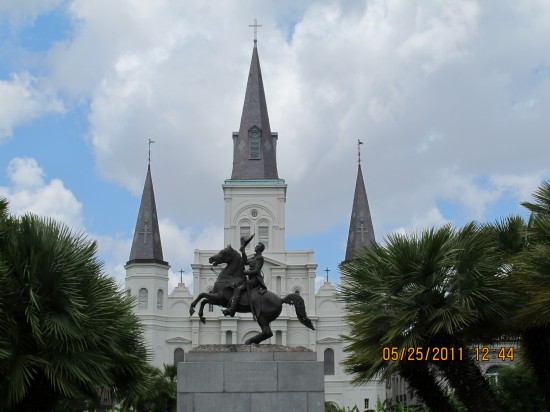 Jackson Square in the French Quarter 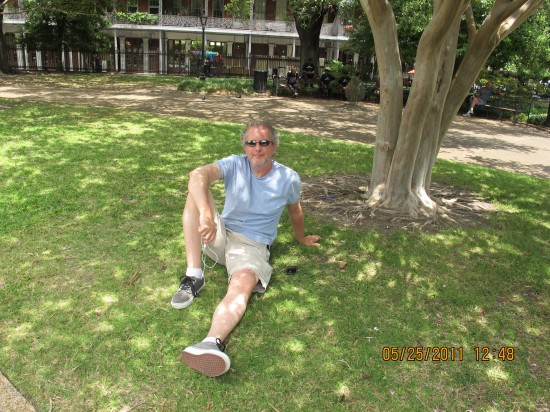 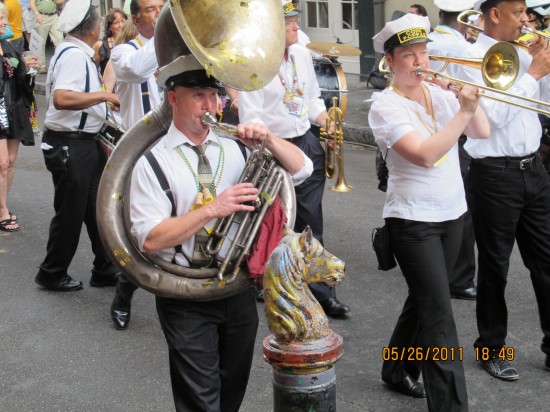 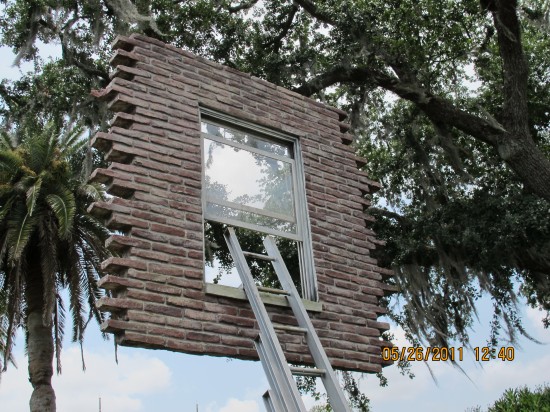 Too Late For Help

This picture of Paul pretty much sums it up…happy to be done with the Signal Mountain, Tennessee sit and ready to move on with our lives. Our last day was spent in Chattanooga, at the 2011 Nightfall Concert Series.  Dawes played that night and we left the area feeling a little bit better about things.

We visited our friends Peg and Owen just outside of Memphis for a few days before leaving Tennessee altogether and driving to New Orleans. They have a Georgetown motorhome and let us sleep in it while we were there (woo-hoo!).  I haven’t quite convinced Paul that he wants to live with me in an Airstream yet, but all in good time.

A Drive Around Munford with Owen and Peg 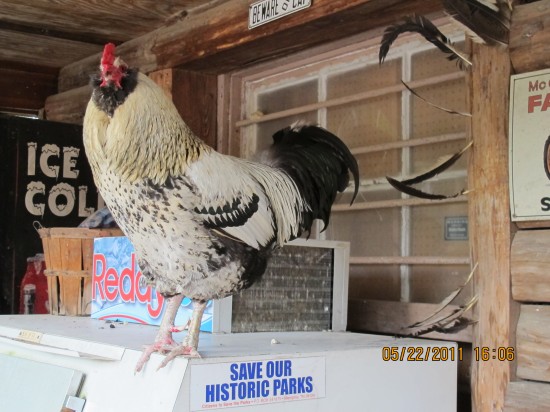 Greeter at the General Store

True Southern Hospitality, a house full of snuggly dogs, and stormy weather allowed for us to decompress a bit before heading on to New Orleans, Vegas, and Sedona before taking on our next sit in Lake Charles, Louisiana.

Storm Brewin' Out Back

Paul and Owen, atop The Peabody Hotel in Memphis

We enjoyed driving around Munford (although seeing the water levels of the Mississippi was a bit scary, especially after riding out April’s tornadoes) and hanging out in Memphis, on Beale Street for the most part. Don’t try this at home, kids…

Beale street is known for it’s Flippers.  Earlier on, they had younger Flippers, and the older ones came out at dusk.  I doubt this Flipper was more than twelve years old.  To see what these guys are capable of, watch this video.  SO cool.

Thank you, Peg and Owen…can’t wait for you to come visit us now that we are hunkering down in Portland, Oregon!