Camas, Washington by Way of Utah (In Pictures)

Winger's for Some Road Food

Our First Meal in Oregon

Same Price as the Utah Motel ~ What The?

Keeping it Cool at Camas Antiques

Buttons to Remind Me of Simpler Times

Back “Home” in Evergreen, Colorado (In Pictures)

Garden at the Parkview House

Our View From The Gardener's Cottage

Dancing with Jen at Cactus Jacks 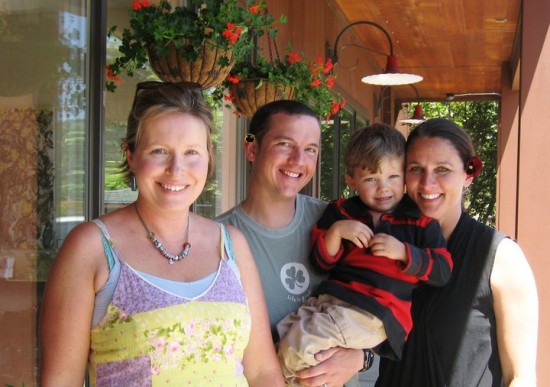 I Finally Got to Meet Paula (New Owner of MGO), Scott (Hubster) and Sam

On The Road Again

Paul and I were contacted by a couple in Lake Charles who are big into travel and interested in doing home exchanges and possibly taking on some house and pet sits themselves.  We really enjoyed meeting them before they headed off on their vacation. This couple connected us with their friends as well, who had a beautiful waterfront camp that they frequented on weekends. They even had RV hook-ups for their friends and family when they came to visit! So cool. This picture was taken from the camp. What a beautiful spot. Thank you for your Southern Hospitality, Micky and Martha!

Paul loves these  riding lawn mowers. He won’t let me mow any of the lawns on our sits. True story. So, here he is…mowing the lawn. We were perched on a rock up on Bear Mountain when we lived in Evergreen, Colorado and didn’t need a lawn mower (the elk took care of random patches of grass). Perhaps he feels he is making up for lost time.

We drove the Creole Nature Trail to Holly Beach and stopped at the Cameron Prairie National Wildlife Refuge along the way. This is the first alligator either of us has seen out of captivity. I took the picture from a boardwalk and am not as close to said alligator as I look. I do love a good shot but am not so foolish as to annoy an alligator. Note to Birders: The Creole Trail is considered one of the top ten birding locations in the country, with over 300 species of birds. Three hundred!

The trail led us to Holly Beach, also known as the “Cajun Riviera”.  We parked on the beach (no wheelies were popped) and walked along the shore, meeting lots of friendly people along the way.

Almost all of the homes on Holly Beach were rebuilt after Hurricane Rita came through and demolished the area back in 2005. Several families have been unable to rebuild due to more stringent building codes. I move around too much to ever feel complete loyalty to any one place, but it leaves me with a heavy heart to think of those that are displaced and then unable to rebuild on their property, which in some cases has been in the family for generations. 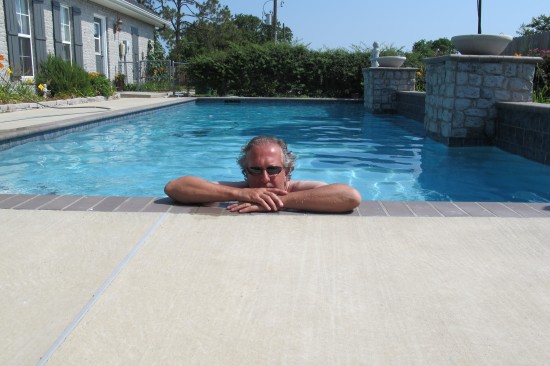 Fun in the Sun

We were fortunate enough to have this salt water pool all to ourselves during the two week sit. What a luxury it was (Louisiana gets HOT in the summertime). Some days we were in and out of the pool several times a day. Rough life, I know.

Grayson Capps Has a story to Tell

Did you know that I love Grayson Capps and the Lost Cause Minstrels?  I discovered them while on a sit for my cousins in Connecticut several years ago.  They had a Netflix account and I watched the film A Love Song for Bobby Long while there.  It is based on the novel Off Magazine Street by Grayson’s father, Ronald Everett Capps.

I fell in love with the imagery, storyline, soundtrack (which featured Grayson’s songs)…everything.  As luck would have it, the band happened to be playing at The Maple Tree Cafe around about the same time, so I went with my friend Kim and it was love at first song.

When Paul discovered that Grayson Capps and the Lost Cause Minstrels would be playing at The Porch while we were in Lake Charles, I nearly peed myself.  I believe Grayson is telling a story about “Washboard Lisa” in the picture above.  Don’t you love it when musicians give you a glimpse of themselves and their lives between songs? 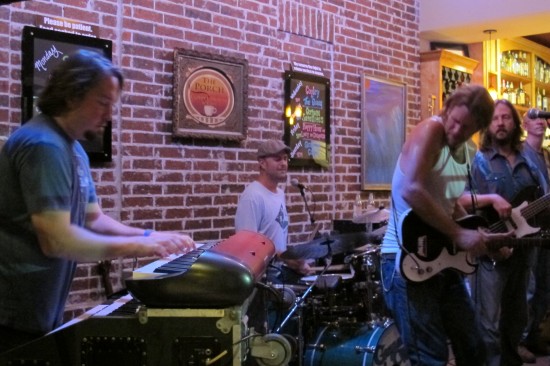 I’ve had the opportunity to talk with Grayson Capps twice, and both times have been such a pleasure.  The three of us talked about the film and the book his father wrote that prompted it, and Grayson having lost so much of his music and belongings in Katrina, and the passing of Pinetop Perkins.

Having the opportunity to experience Grayson Capps and the Lost Cause Minstrels again was the highlight of my stay in Lake Charles. That, and the po’ boys, étouffée and lively conversation at Big Daddy’s Sports Grill.  Oh, and the pool.  Lake Charles was good to us.

On the Road Again

Next stop?  Amarillo, Texas.  This was a quick lunch break at a Louisiana rest stop.  Quick, because it was over 105 outside.  So long, swimming pool.  It can’t ALL be glitz and glam, eh? 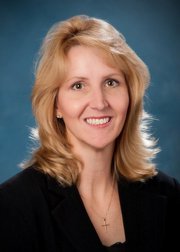 It has been a month since Paul and I left Signal Mountain, Tennessee.  A woman who lived a few miles away from us during our six month sit there went missing back in April and I have not stopped thinking about her and her loved ones (especially her children) since.

The way her disappearance has been dealt with makes little sense to me.  I have been gleaning as much information as I can via the facebook page Bring Gail Home Now.  Links to articles, radio broadcasts, pictures, etc. can be found there.  You can “like” this page if you are on fb, or Google her name for details if you are not.

I don’t know what I can do besides try my best to let everyone know that she is missing in hopes that someone  somewhere will come forward with something before yet another case goes cold (there are currently four women missing that I now know of in Tennessee).

I am not naive ~ I know these things happen every day all over the world.  I am just confused by what is, and more importantly, what is not, being done with regards to this particular case.  So, if I think it is doing any little bit of good, I will continue to blog about this subject.  I am counting on feedback from you on this one.

Our New Portland, Oregon Mailing Address (as of June 2011) 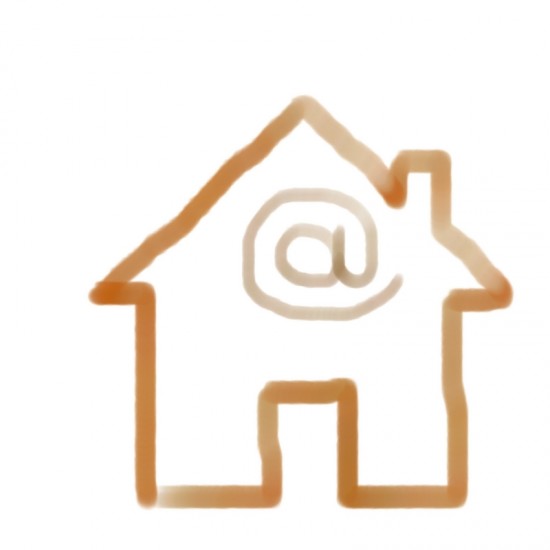 Our new street address (and other pertinent info):

Um…OK…so we changed addresses again.  Here is our latest contact info, as of January 2012 : ) We should be here for a while…for real, this time…